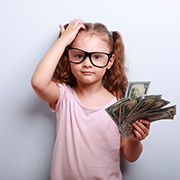 UPDATE: In December 2019, new rules were enacted with regard to the Kiddie Tax. Read the changes below:

The application of the estates and trusts tax rate to certain unearned income of children – the so-called “kiddie tax” – has been reverted to the prior use of the parents’ tax rate for tax years beginning after 2019. The change had had the unintended consequence of increasing the tax on the unearned income – such as military death benefits – of children in low-income families.

Please contact us or your CPA if you need consulting advice regarding the Kiddie Tax. We do not provide individual tax advice online.

What changed? The TCJA only revises the kiddie tax rate structure. The rest of the kiddie tax rules are the same as before. But with all the new tax changes, depending on your personal circumstances, your children or grandchildren may be hit even harder by the kiddie tax. If your child or grandchild has significant unearned income, planning for 2018 is especially crucial.

Here's what you need to know about how this tax can come into play under the new law.

Important note: For simplicity, throughout this article we use the terms "child" and "children" to apply to both children and young adults under age 24 who may be subject to the kiddie tax. 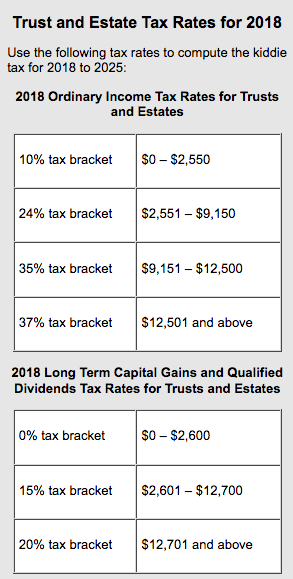 For 2018 through 2025, the TCJA revises the kiddie tax rules to tax a portion of a child's net unearned income at the rates paid by trusts and estates. These rates can be as high as 37% for ordinary income or, for long-term capital gains and qualified dividends, as high as 20%. (See "Trust and Estate Tax Rates for 2018," at right.)

The trust and estate tax rate structure is unfavorable because the rate brackets are compressed compared to the brackets for single individuals. In other words, the kiddie tax rules can override the lower rates that would otherwise apply to an affected child's unearned income.

By comparison, under prior law, the kiddie tax rules taxed a portion of an affected child's unearned income at the parent's marginal tax rate if that rate was higher than the child's rate. For 2017, the parent's rate could be as high as 39.6% for ordinary income or, for long-term capital gains and dividends, as high as 20%.

Important note: For purposes of the kiddie tax rules, the term "unearned income" refers to income other than wages, salaries, professional fees and other amounts received as compensation for personal services rendered. Examples of unearned income include capital gains, dividends and interest. Earned income from a job or self-employment isn't subject to the kiddie tax.

In calculating the federal income tax bill for a child who's subject to the kiddie tax, the child is allowed to deduct his or her standard deduction. For 2018, if the TCJA hadn't passed, the standard deduction for a child for whom a dependent exemption deduction would have been allowed under prior law is the greater of:

For 2018, the kiddie tax potentially affects children who don't provide over half of their own support in 2018 and who live with their parents for more than half of the year.

The kiddie tax can potentially apply until the year that a child turns age 24. More specifically, the kiddie tax applies when all four of the following requirements are met for the tax year in question:

Rule 2. The child is 18 at year end and doesn't have earned income that exceeds half of his or her support. (Support doesn't include amounts received as scholarships.)

Rule 3. The child is age 19 to 23 at year end and 1) is a student, and 2) doesn't have earned income that exceeds half of his or her support. A child is considered to be a student if he or she attends school full-time for at least five months during the year. (Again, support doesn't include amounts received as scholarships.)

Kiddie Tax in the Real World 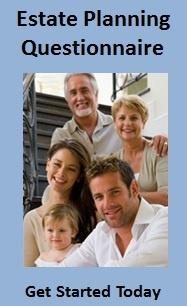 Here are several examples to help you understand who could be hit with the kiddie tax after the changes made by the TCJA:

Beth will be 19 on December 31, 2018. She doesn't have any earned income for the year, and she's a full-time student for the entire year. She falls under Rule 3. For 2018, she will be subject to the kiddie tax if the other three requirements are also met.

Dennis will be 21 on December 31, 2018, and he graduates from college in May 2018. He qualifies as a full-time student, because he's enrolled for the first five months of the year. Dennis couldn't find a job after graduation, so he doesn't provide over half of his own support for the year. Therefore, he's subject to the kiddie tax for 2018 under Rule 3, if the other three requirements are also met.

Ellie will be 24 on December 31, 2018. Even though Ellie is still enrolled in college, she's exempt from the kiddie tax for 2018 and all subsequent years, because none of the age-related rules apply to her.

There are four steps when calculating the federal income tax bill under the kiddie tax rules.

To illustrate how to calculate a child's federal tax bill, let's look at one of the previous examples:

Important note: Without the kiddie tax, all of Adam's $6,650 of taxable income would have been taxed at 10% under the regular rates for single taxpayers, resulting in only $665 of tax.

Please Note: Before asking any personal tax questions in our comment section below, we do not provide individual tax advice via the Internet. It's advised to consult with a CPA about your personal tax situation. 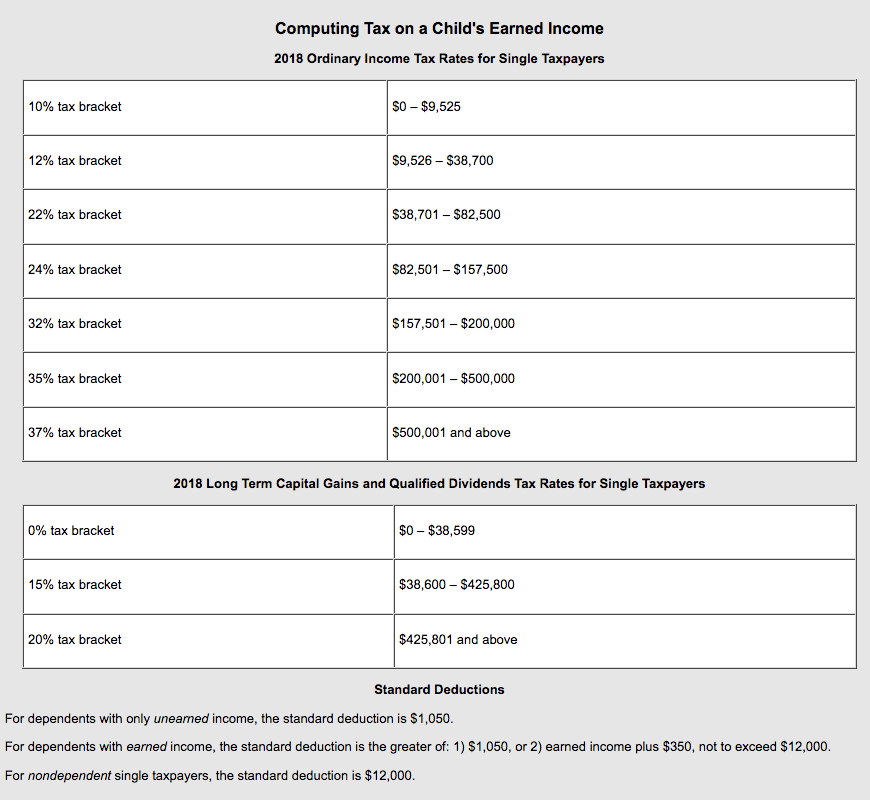