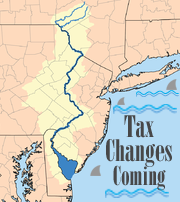 There may be major state income tax changes coming for those who cross the Delaware River for work.

New Jersey Gov. Chris Christie last week announced that he plans to discontinue a long-standing agreement between New Jersey and Pennsylvania allowing taxpayers to pay income tax in the state where they live, not where they work.

The change is set to go into effect on Jan. 1, 2017, but Christie said he might reinstate it if the New Jersey Legislature fills a budget hole to reduce public employees' health-care costs, according to The Philadelphia Inquirer.

Pennsylvania’s state income tax is a flat 3.07 percent. New Jersey has six marginal income tax rates for individuals, ranging from 1.4 percent for those earning $20,000 or less to 8.97 percent for income greater than $500,000. There also are seven rates for married couples filing joint returns.

Pennsylvania residents who work in New Jersey and earn more than $113,000 and file jointly would have to pay more in state income taxes come 2017, according to an Inquirer analysis. Conversely, New Jersey residents who work in Pennsylvania and earn less than $113,000 and file jointly would pay less in state taxes, the Inquirer found.

The change would require Pennsylvania and New Jersey residents who work in the other state to file two state tax returns. This is the treatment for individuals living in one state and working in another when there is no reciprocal agreement in place between the states. We can help with the additional tax filings and any other questions you have about the possible changes.

We will also keep abreast of any changes in Christie’s stance. Both Pennsylvania Gov. Tom Wolf and some New Jersey Democrats strongly criticized the change to the tax reciprocity agreement.

The change would cost Pennsylvania an estimated $5 million annually in state income taxes while New Jersey would gain an estimated $180 million in state taxes, according to the Inquirer article.