President-Elect Joe Biden has expressed support for major changes to the current federal tax laws, though with control of the Senate still up in the air, it’s unknown which of his plans may come to fruition.

But it’s still wise to educate yourself on his plans, especially as you start working on year-end tax planning. Biden’s plans may mean rollbacks or revisions of several Tax Cuts and Jobs Act provisions.

C Corporations: Notably, the Biden plan would increase the corporate federal income tax rate from 21% to 28%. The change would raise an estimated $1.1 trillion or so over 10 years. This rate is significantly lower than the 35% maximum effective rate for profitable corporations that was in place before the TCJA was enacted. But Biden's proposed tax rate would be a flat rate, not based on a graduated schedule.

In addition, if elected, Biden would support a new 15% minimum tax on corporations with at least $100 million in annual income that pay little or no federal income tax under the "regular rules." An affected corporation would pay the greater of: 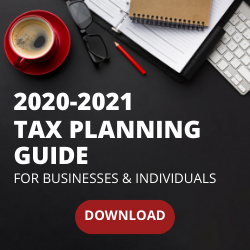 Bank Fees: Biden also would introduce a so-called "financial risk fee" on banks, bank holding companies and nonbank financial institutions with over $50 billion in assets. The fee would be based on an institution's covered liabilities and would provide the Federal Deposit Insurance Corporation (FDIC) with a pool of funds to pay for FDIC-insured deposits held in failed institutions.

If elected, Biden would also like to eliminate federal income tax deductions for oil and gas drilling costs and depletion.

Under current law, the QBI deduction is phased out at higher income levels. For 2020, phase-out begins once taxable income (calculated before any QBI deduction) exceeds $163,300 for an unmarried individual or $326,600 for a married joint-filing couple. Other limitations apply in specific circumstances. Biden's plan would simplify matters by limiting QBI deductions only for individuals who earn more than $400,000. (As mentioned earlier, however, Biden would eliminate QBI deductions for rental real estate activities.)

READ MORE: 10 Tax-Saving Strategies for Businesses to Use Before Time Runs Out

The Biden plan would raise the top individual rate on ordinary income and net short-term capital gains back to 39.6%, the top rate that was in effect before the TCJA lowered it to 37% (for 2018 through 2025). Biden also has promised not to increase taxes for those who make under $400,000. But it's unclear whether that limit refers to taxable income, gross income or adjusted gross income — or whether it would apply equally to singles, heads of households and married joint-filing couples.

Other elements of Biden's plan that would affect individual taxpayers include:

Limits on Itemized Deductions: For upper-income individuals, Biden would reinstate the pre-TCJA rule that reduces total allowable itemized deductions above an applicable income threshold. Prior to the TCJA, allowable deductions were reduced by 3 cents for every dollar of income above a threshold. Regardless of who's elected president in 2020, the pre-TCJA limits will be reinstated in 2026 under current law, unless they're extended by Congress.

In addition, Biden's plan would limit the tax benefit of itemized deductions to 28% for upper-income individuals. That means each dollar of allowable itemized deductions could not lower your federal income tax bill by more than 28 cents, even if you were in the proposed 39.6% maximum tax bracket.

Relief for Certain Homeowners: Biden is calling for elimination of the TCJA's $10,000 cap on itemized SALT deductions, which mainly affects residents of high-tax states. His plan also would create a new refundable tax credit of up to $15,000 for eligible first-time homebuyers that would be collected when a home is purchased, rather than later at tax-return filing time.

New Credit for Low-Income Renters: Biden would like to establish a new refundable tax credit for low-income renters that's intended to hold rent and utility payments to 30% of monthly income.

READ MORE: Strategies to Save on Personal Taxes in 2020 and Beyond

Expanded Breaks for Eligible Families: His plan includes a refundable federal tax credit of up to half of a family's costs to care for children under 13 and other disabled dependents. He would like the maximum credit to be $8,000 for one qualifying child or $16,000 for two or more qualifying children. Families earning between $125,000 and $400,000 could qualify for partial credits. He's also proposed implementing an income-based cap on child-care costs for many families.

His plan would also establish a new credit of up to $5,000 for "informal" caregivers, who are family members or loved ones who do this work for no pay.

This provision can be a huge tax-saver for an inherited asset that has appreciated significantly over the years — such as stock shares that were acquired many years ago for a small amount and are now worth millions. The Biden plan would eliminate this tax-saving provision.

Biden hasn't yet clarified whether he would also like to see a lower unified federal gift and estate tax exemption, which is currently set at $11.58 million ($23.16 million for married couples).

Under the Biden plan, net long-term gains (and presumably dividends) collected by those with incomes above $1 million would be taxed at the same 39.6% maximum rate that he would apply to ordinary income and net short-term capital gains. With the 3.8% NIIT add-on, the maximum effective rate on net long-term gains would be 43.4% (39.6% + 3.8%). That would be almost double the current maximum effective rate for high income individuals.

Payroll Tax Hike for Higher-Income Individuals: Under current law, the 12.4% Social Security tax hits the first $137,700 of 2020 wages or net self-employment income. Employees pay 6.2% through withholding from paychecks, and employers pay the remaining 6.2%. Self-employed individuals pay the entire 12.4% out of their own pockets via the self-employment (SE) tax. For 2020, the 12.4% Social Security tax stops once 2020 wages or net SE income exceed $137,700. The Social Security tax ceiling is adjusted annually to account for inflation, so it usually goes up every year under current law.

Green Tax Breaks: Biden supports reinstating or expanding tax incentives intended to reduce carbon emissions, including credits for buying electric vehicles produced by manufacturers with credits that have been phased out under current law.

Now is the time to take steps to possibly reduce your 2020 tax liability. Get our 2020-2021 Tax Planning Guide to get started.