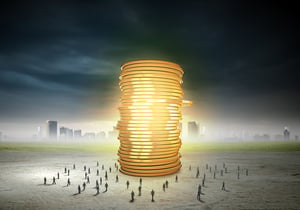 Bitcoin has been around for nearly a decade. But the tax rules related to "virtual currency" are still evolving. In fact, some Bitcoin investors may be in for a surprise when they file their 2019 returns. Tax matters have become even more complicated because relevant provisions of the Tax Cuts and Jobs Act took effect starting in 2018.

Here's what you should know about the brave relatively new world of virtual currency.

Bitcoin emerged in 2009, and it's currently the most widely recognized form of virtual currency. It may also be referred to as digital, electronic or cryptocurrency.

Unlike cash or credit cards, your local pizza parlor or hair salon isn't likely to accept Bitcoin payments for routine transactions. However, a growing number of larger businesses — including Overstock.com, the Sacramento Kings and online gaming company Zynga — now accept Bitcoin payments. And the trend is expected to continue.

Bitcoin has an equivalent value in real currency. It can be digitally traded between users. You can also purchase Bitcoin with real currencies (such as U.S. dollars or euros) and exchange Bitcoin for real currencies. The most common ways to obtain Bitcoin are through virtual currency ATMs or online exchanges that typically charge nominal transaction fees.

Once you obtain Bitcoin, you can pay for goods or services using "Bitcoin wallet" software that can be installed on your computer or mobile device. When you make  a purchase, the software digitally posts the transactions to the global public ledger. This ensures that the same unit of virtual currency can't be used multiple times.

Some merchants accept Bitcoin to avoid transaction fees charged by credit card companies and online payment providers (such as PayPal). It's also popular in certain foreign countries (including Argentina and Iran) where national currencies are susceptible to inflation, corruption, capital controls or international sanctions.

The supply of Bitcoin is capped at 21 million units. As a result, some people have obtained them for investment purposes, hoping that the value will appreciate over time. The Financial Industry Regulatory Authority (FINRA) warns that Bitcoin is highly speculative and investors shouldn't risk more in Bitcoin than they're willing to lose.

Some of the limited Bitcoin supply hasn't been issued yet. These new issues have been reserved for Bitcoin "miners." These are the people who provide computing power to verify and record virtual currency payments into the global public ledger.

The use of virtual currency has triggered many tax-related questions. Unfortunately, the IRS has been slow to catch up with the new technology and has provided only limited guidance.

In a 2014 ruling, the IRS established that Bitcoin and other convertible virtual currency should be treated as property, not currency, for federal income tax purposes.

As a result, businesses that accept Bitcoin payments for goods and services must report gross income based on the fair market value of the virtual currency when it was received. This is measured in equivalent U.S. dollars.

On the other hand, wages paid to employees using virtual currency are taxable to the employees. Such wages must be reported by employers on W-2 forms. And they're subject to federal income tax withholding and payroll taxes, based on the fair market value of the virtual currency on the date of receipt.

Payments using virtual currency made to independent contractors, qualifying Bitcoin miners and other service providers are also taxable. The rules for self-employment tax generally apply, based on the fair market value of the virtual currency on the date of receipt. Normally, payers must issue 1099-MISC forms.

A payment made using virtual currency is subject to information reporting to the same extent as any other payment made in property.

One gray area related to virtual currency is how to treat the capital gains and losses realized by taxpayers who invest in Bitcoin and exchange it for real currency (such as U.S. dollars). Previously, some tax experts claimed that these exchanges qualify as "like-kind exchanges" of properties under Section 1031 of the tax code. With a like-kind exchange, no current tax is due on the exchange of investment or commercial properties. To qualify for the favorable tax treatment, the properties you relinquish and receive must be similar in nature.

This was an easy solution for Bitcoin traders. They could fall back on the rules for like-kind exchanges to avoid current tax bills.

This change creates a burden for Bitcoin investors who trade in currencies: They must use the price of the Bitcoin when it was acquired and the price on the date of the exchange to calculate the resulting capital gain or loss. Unlike sales of securities, no authority is tracking these figures for investors. In addition, it's unclear whether investors can deduct transaction costs and accounting fees related to virtual currency investments.

Most taxpayers are unaware of the requirements for reporting virtual currency transactions. For the 2013 through 2015 tax years, the IRS estimates that fewer than 900 taxpayers declared Bitcoin earnings annually.

The IRS plans to ramp up compliance in this area. Underpayments of tax attributable to Bitcoin transactions could be subject to penalties, unless the taxpayer can establish that the failure to properly file was due to reasonable cause.

The IRS is targeting virtual currency transactions as a potential source of additional tax revenue. But it's issued very limited guidance on the reporting requirements. For the latest developments on reporting Bitcoin and other virtual currency exchanges, contact us.