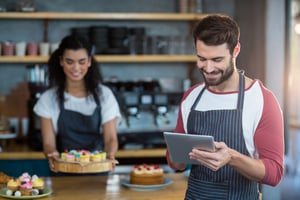 Great news! Important tax guidance was released in late December 2018 that is considered to be a significant victory for the restaurant industry: Employee Shift Meals Remain 100-percent deductible for tax purposes.

You may be aware that as a result of the 2017 tax reform known as the Tax Cuts and Jobs Act (TCJA), employers can deduct only 50 percent of the cost of meals “furnished to employees at an employer-operated eating facility.” Prior to the TCJA, these meals were 100-percent deductible.

When the TCJA was enacted, it was generally agreed that this new 50-percent disallowance applies to the cost of meals provided by a non-restaurant taxpayer that operates a cafeteria on its premises. An example of this would be an employee cafeteria on the Google campus, where meals are provided to Google employees free of charge or at a discount. It was less clear whether the 50-percent disallowance also applies to “shift meals” provided by a restaurant free of charge or at a discount to its employees immediately before, after or during their work shifts.

The Joint Committee on Taxation released its “Blue Book” on December 20, 2018. This highly anticipated “book” provides explanations of enacted tax legislation. In good news for the restaurant industry, the Blue Book contains language that confirms that employee shift meals are not subject to the 50-percent disallowance for meals furnished at an employer-operated eating facility, and instead remain 100-percent deductible pursuant to an exception to the 50-percent disallowance rules.

Extending this exception to “shift meals” is an acknowledgement that providing restaurant employees with food and beverages is integral to the operation of a restaurant. Providing your employees with meals is important for many reasons, including (but not limited to):

The specific “Blue Book” language is as follows:

The provision generally does not impact the other exceptions to the 50-percent limitation on deductions for food or beverage expenses, as described infra under prior law. For example, a restaurant or catering business may continue to deduct 100 percent of its costs for food or beverage items, purchased in connection with preparing and providing meals to its paying customers, which are consumed at the worksite by employees who work in the employer’s restaurant or catering business.