Estate Planning: How to Save Taxes using the Generation-Skipping Transfer Tax 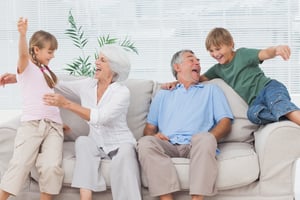 Beneficial rules for the generation-skipping transfer (GST) tax are currently in force, which may allow you to pass on assets to future generations without a federal tax bill.

When it comes to arranging for gifts and bequests to loved ones, most planning strategies focus on avoiding or minimizing the federal gift and estate taxes. Rightly so. But there's one more piece to the puzzle. It's called the generation skipping transfer tax. The GST tax is intended to snare those who would try to foil the federal gift and estate tax system by transferring wealth to persons more than one generation younger than themselves (typically grandchildren).

Example 1: Let's say you die and leave many millions of dollars directly to your children. Your estate will be taxed on the excess over the current federal estate tax exemption of $11.4 million in 2019 (up from $5.49 million in 2017). If your children preserve the wealth and leave it to their children (your grandchildren), the IRS gets to collect another round of estate taxes on the same wealth.

But what if you instead leave your millions to your grandchildren? Now the IRS would lose its second bite of the apple, because you have cleverly made a transfer of wealth that skips a generation. Indeed, this strategy worked great until Congress dreamed up the GST tax. It ensures that the IRS will get a second bite after all. So even after you've set things up to take advantage of available gift and estate tax loopholes, your planning work is not finished. You need to take a step back and make sure you've successfully avoided (or at least minimized) the GST tax as well.

If you have no intention of ever leaving any money or assets to your grandchildren, great grandchildren, or anyone else in those generations or below, you don't have to worry about reading this article. The GST tax only hits wealth transfers to individuals more than one generation below you. For example, say all your money and assets will go straight to your children and/or spouse via gifts and bequests. In this scenario, the GST tax is inapplicable. All you have to worry about is avoiding the gift and estate taxes.

But if you set up a trust with primary or contingent beneficiaries more than one generation below you, it could trigger unexpected GST tax problems — as we'll explain a bit later. Here's the really bad part: When the GST tax applies, the rate is 40%. That 40% rate is on top of any gift or estate tax on the same transaction.

Bottom Line: Whenever you arrange for big gifts or bequests, make sure you take the GST tax rules into account. They can come into play in unexpected ways.

So you and your spouse can together make up to $22.8 million in direct gifts to grandchildren and lower generations without any GST tax worries. Your GST tax exemption will automatically be portioned out ("allocated" in tax language) to shelter all your direct gifts until the exemption has been used up.

By indirect gifts, we mean when you give or leave money to a trust with your grandchildren named as contingent beneficiaries, or when your grandchildren are primary beneficiaries of a trust, along with one or more other persons from an older generation. Such indirect gifts can be made while you're still alive or by bequest upon death. When money or assets come out of one of these multiple-beneficiary trusts to a grandchild, watch out! The GST tax will generally be due, unless you (or your estate's executor) chose to allocate (use up) some or all of your GST tax exemption to provide shelter.

For gifts, you make an exemption allocation on Form 709 (the federal gift tax return) filed for the year you make the gift. For bequests, your executor can make the allocation as part of handling the estate tax return (Form 706). Here's a very simple example of how indirect gifts can cause big-time GST tax problems down the road.

Example 2: In 2019, you give $6 million worth of stock to a trust set up for your adult daughter. She is to receive all the trust income for her life. Whatever's left in the trust goes to her two children (your grandchildren) after she dies. So far, so good. There's no gift tax, because your gift is well under the $11.4 million exemption. And there's no current GST tax, because your grandkids are only contingent beneficiaries (they get nothing until your daughter passes away).

So when you set up the trust, you may not allocate any of your GST tax exemption to the gift because you don't see any problems. That would be a mistake. Years later, the stock is worth $30 million when your daughter dies. So the trust is liquidated, and your two grandchildren each receive $15 million.

Unfortunately, they will have to pay a GST tax bill of several million bucks. Reason: Because each of your grandchildren is treated as receiving a $15 million gift from you under the GST tax rules — even though your original gift was "only" $6 million and was not made directly to them. Had you simply allocated $6 million of your GST tax exemption when you funded the trust in 2019, there would be zero GST tax due when your grandchildren get their millions years from now.

The GST Tax Rules in a Nutshell

Contact our Estate and Trust Services team for information about how to proceed in your situation.