Looking to Invest in Opportunity Zones? There’s New Guidance for This Tax Benefit 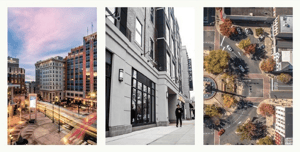 The IRS has issued proposed regulations that provide guidance under new provisions added by the Tax Cuts and Jobs Act (TCJA) related to Qualified Opportunity Funds (QOFs). Specifically, the guidance addresses the gains that may be deferred as a result of a taxpayer's investment in a QOF, as well as special rules for an investment in a QOF held by a taxpayer for at least 10 years.

The TCJA now allows the designation of certain low-income community population census tracts as Qualified Opportunity (QO) Zones eligible for a number of favorable tax rules aimed at encouraging economic growth and investment in businesses within the zones. There are currently more than 8,700 communities in all 50 states, the District of Columbia and five U.S. territories that have been designated as QO Zones. They will retain those designations until December 31, 2028.

Investors can form private investment vehicles, known as qualified opportunity funds (QOFs), for funding development and redevelopment projects in the zones. The tax code provides temporary deferral of inclusion in gross income for capital gains reinvested in a QOF and the permanent exclusion of capital gains from the sale or exchange of an investment in the QOF.

LVEDC has prepared new informative materials about qualified opportunity zones (QOZs) and how developers can take advantage of them in the Lehigh Valley: https://t.co/E8hfoywLCc pic.twitter.com/hY54avLQR6

In general, a QOF is an investment vehicle: 1) that's organized as a corporation or a partnership for the purpose of investing in QO Zone property (other than another QOF) and 2) that holds at least 90% of its assets in QO Zone property.

The guidance notes there are situations where deferred gains may become taxable if an investor transfers their interest in a QO Fund. Here's an example from the IRS: If the transfer is done by gift, the deferred gain may become taxable. However, inheritance by a surviving spouse isn't a taxable transfer, nor is a transfer, upon death, of an ownership interest in a QO Fund to an estate or a revocable trust that becomes irrevocable upon death.

The proposed rules generally apply to tax years ending after the date the regulations are published in the Federal Register. However, taxpayers may generally rely on the rules (except for one provision that doesn't apply until 1/1/28) if they apply them consistently and in their entirety.

The rules involving QOFs are complex. There will likely be more IRS guidance and many states are considering what they're going to do about Qualified Opportunity Zones. Consult us if you're interested in investing.