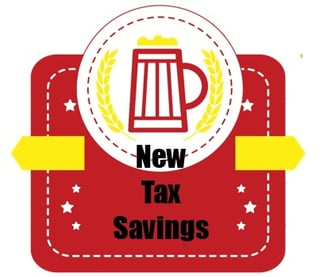 Brewers, vintners and distillers should all say “cheers” to the new federal tax laws.

Instead of being taxed at a straight $13.50 per proof gallon, the act creates a tiered rate:

While these tax benefits are scheduled to last only two years, they’re well timed with the many other business tax breaks included in the Tax Cuts and Jobs Act. The next few years are a great time to buy business equipment, as more generous business asset expensing and depreciation tax breaks are now available.

The maximum Section 179 deduction increases to $1 million, and the phaseout threshold amount is increased to $2.5 million (from $510,000 and $2.03 million respectively). There are also much better first-year bonus depreciation rules. Read more about these changes here.