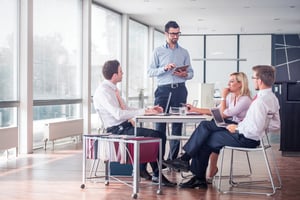 Other business tax changes that start Jan. 1 include:

Examples of sales of intangible property include receipts from patents, royalties, franchise agreements, sale or exchange of securities, and interest in connection with loans. Under current law, receipts from the sale of such property are not apportioned based upon where the purchaser receives or uses the property. The new rules will align the apportionment rules governing sales of intangible property with the sales of tangible personal property, real property and services to be consistent with market sourcing, meaning where the purchaser paying for the sale or using the property is located.

Economic Nexus for Corporations with $500,000 or More in Pennsylvania Sales

The budget codifies a 2019 bulletin requiring out-of-state corporations with $500,000 or more of Pennsylvania sales to file corporate tax reports in Pennsylvania.

READ MORE: Multi-State Businesses: How to Know if You Owe Taxes (Video)

The budget increases the limit from $25,000 to match the federal limit – currently $1,080,000 for 2022 – on Section 179 property that may be treated as a deductible expense for S Corps and partnerships. There are no changes to the C Corporation rules and regulations.

The budget conforms state 1031 Like-Kind Exchange rules for S Corps and partnerships to the federal rules. This will allow state income tax on the gain from real property to be deferred if the proceeds are re-invested in similar property as part of a qualifying like-kind exchange.

A so-called workaround to the $10,000 cap on the federal deduction for state and local taxes (or SALT) was not included in the final budget so there will not be a Pennsylvania pass-through entity tax for the foreseeable future.

READ MORE: The Controversial SALT Limitation: What Taxpayers can do on State and Local Taxes Deductions

While these tax changes don’t start until Jan. 1, now is a good time to start discussing with your CPA how you can best take advantage of them for your business. Please contact us if you’re interested in scheduling a tax planning consultation.