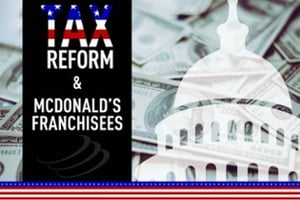 Federal tax reform through the Tax Cuts and Jobs Act provides many new tax benefits to McDonald’s Owner/Operators, including some major depreciation changes, most of which are beneficial, as we interpret the tax law changes.

The new bonus provision is made retroactive back to assets placed in service after September 27, 2017. However, during the time period of September 27 through December 31, 2017, you have the option of electing 100% or 50% Bonus Depreciation, whichever may be best for your situation. The 100% Bonus Depreciation is available through the end of 2022 at which time the bonus depreciation will decline by 20% annually until it is phased out in 2027.

In regards to the amount of 179 available for purchases of SUVs, the $25,000 limit is still intact. However, all of these limits will be indexed annually for inflation.

In addition to the increased 179 limits, the act also expands the definition of additional items that will now be eligible for Section 179. This will include Qualified Improvement Property or QIP, as well as certain improvements to the building that includes roofs, HVAC units, fire protection and security systems.

Take the Good News with the Bad

Qualified Improvement Property is defined as an improvement to the interior portion of a non-residential building. These improvements must be made after the building is placed in service and does not enlarge or change the internal structure. This means that rebuilds, relocations and new store builds will not qualify as Qualified Improvement Property. These changes take effect for any assets placed in service starting January 1, 2018.

Last Year Versus This Year

As we know, many McDonald’s franchisees are undergoing a lot of reinvestments, with many of them substantial. So, let’s see how this change will affect your ability to depreciate these larger reinvestments to experience the biggest tax savings. 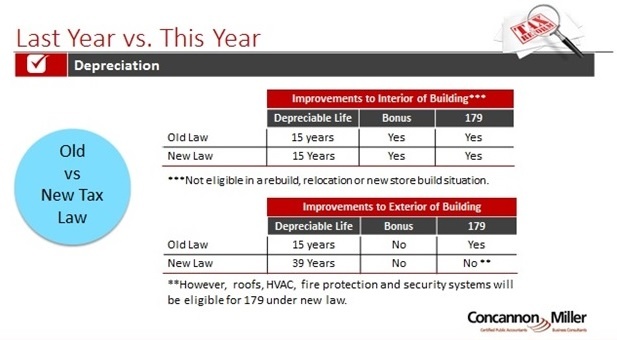 Let’s first look at improvements made to the interior portion of the restaurants. These were previously classified as QLI and are now QIP. As you can see, there really is no change in your ability to depreciate these improvements quickly if needed as they are eligible for both 179 and Bonus Depreciation, as we interpret the tax law changes.

However, these items are not eligible to be treated as QIP in a rebuild, relocation and new store build situation. In these situations, these items would not be eligible for 15-year depreciation, but instead would be depreciated over 39 years with no ability for 179 or Bonus Depreciation.

Now let’s look at the changes to improvements to the exterior of the building. This is where there are significant differences in comparing the old depreciation rules versus the new depreciation rules. These improvements, under the new law, will no longer be eligible for 15-year depreciable life or 179 expensing. Instead, these items will be depreciated over 39 years.

Because of this change, it may be quite beneficial to obtain a cost segregation study on these projects. This could allow you to move more of the costs into shorter asset lives and provide some flexibility with available depreciation deductions.

The one caveat here is that there are certain exterior improvements that will be eligible for 179 expensing even though they are 39-year assets. As mentioned, these items consist of roofs, HVAC units, fire protection and security systems.

As you can see from the chart, the annual limits have almost tripled.

We’ve developed three examples of how the depreciation changes might affect McDonald’s Owner/Operators. The examples cover lobby remodels and EOTF, a full MRP and a rebuild/relocation/new restaurant build. Click here to view the examples.

With so many changes to the depreciation rules, planning – although always needed – will be even more critical for all of the reinvestments being completed in the restaurants, including a personalized assessment for your particular situation. Please contact us for assistance on how to maximize depreciation tax savings under the new tax law.