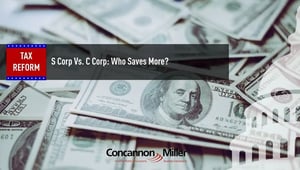 Federal tax reform through the Tax Cuts and Jobs Act introduced a flat 21% federal income tax rate for C corporations for tax years beginning in 2018 and beyond. Under prior law, profitable C corporations paid up to 35%. This change has caused many business owners to ask: What’s the optimal choice of entity for my business?

Under prior tax law, conventional wisdom was that most small and midsize businesses should be set up as sole proprietorships, or so-called "pass-through entities," including:

The big reason that pass-through entities were popular was that income from C corporations is potentially taxed twice. First, the C corporation pays entity-level income tax. And then, corporate shareholders pay tax on dividends and capital gains. The use of pass-through entities avoids the double taxation issue, because there's no federal income tax at the entity level.

This issue is further complicated by another provision of the TCJA that allows noncorporate owners of pass-through entities to take a deduction of up to 20% on qualified business income.

There's no universal "right" answer when deciding how to structure your business to minimize taxes. The answer depends on your business's unique situation and your situation as an owner. Here are three common scenarios and choice-of-entity implications to help you decide what's right for your start-up venture.

If your business consistently generates losses, there's no tax advantage to operating as a C corporation. Losses from C corporations can't be deducted by their owners. So, it probably makes sense to operate as a pass-through entity. Then, the losses will pass through to your personal tax return (on Schedule C, E, or F, depending on the type of entity you choose).

Business Distributes All Profits to Owners

Let's suppose your business is profitable and pays out all of its income to the owners. Here are the implications of operating as a C corporation vs. a pass-through entity under this scenario:

Results with a C corporation: After paying the flat 21% federal income tax rate at the corporate level, the corporation pays out all of its after-tax profits to its shareholders as taxable dividends eligible for the 20% maximum federal rate.

So, the maximum combined effective federal income tax rate on the business's profits — including the 3.8% net investment income tax (NIIT) on dividends received by shareholders — is 39.8%. That equals 21% for the corporate level tax, plus the personal level tax rate on the dividends, which are reduced by the corporate level tax [(20% + 3.8%) x (100% – 20%)]. While you would still have double taxation here, the 39.8% rate is lower than it would have been under prior law.

Results with a pass-through entity: For a pass-through entity that pays out all of its profits to its owners, the maximum effective federal income tax rate on the venture's profits is 40.8%. That equals the highest federal income tax rate for individuals (37%), plus 3.8% for the NIIT or 3.8% for the Medicare tax portion of the self-employment (SE) tax (whichever applies). This example assumes that, if the SE tax applies, the additional 0.9% Medicare tax on high earners increases the rate for the Medicare tax portion of the SE tax to 3.8%.

In this scenario, operating as a pass-through entity is probably the way to go if significant QBI deductions are available. If not, it's basically a toss-up. But operating as a C corporation may be simpler from a tax perspective.

Let's suppose your business is profitable, but it socks away all of its profits to fund future growth strategies. Here are the implications of operating as a C corporation vs. a pass-through entity under this scenario.

Results with a C corporation: In this example, we're going to assume that retained profits increase the value of the corporation's stock dollar-for-dollar, and that shareholders eventually sell the shares and pay federal income tax at the maximum 20% rate for long-term capital gains.

The maximum effective combined federal income tax rate on the venture's profits is 39.8%. That equals 21% for the corporate level tax, plus the personal level tax on gain that is reduced to reflect the 21% corporate tax [(20% + 3.8%) x (100% – 21%)]. While you would still have double taxation here, the 39.8% rate is better than it would have been under prior law. Plus, shareholder-level tax on stock sale gains is deferred until the stock is sold.

If the corporation is a qualified small business corporation (QSBC), the 100% gain exclusion may be available for stock sale gains. If so, the maximum combined effective federal income tax rate on the venture's profits can be as low as 21%. Ask your tax advisor if your venture is eligible for QSBC status.

Results with a pass-through entity: Under similar assumptions for a pass-through entity, the maximum effective federal income tax rate on the venture's profits is 40.8%. That equals the highest federal income tax rate for individuals (37%), plus 3.8% for the NIIT or 3.8% for the Medicare tax portion of the SE tax (whichever applies). That's slightly higher than the 39.8% rate that applies with the C corporation option.

However, here's the key difference: For a pass-through entity, all taxes are due in the year that income is reported. With a C corporation, the shareholder-level tax on stock sale gains are deferred until the shares are sold.

If you can claim the full 20% QBI deduction, the maximum effective rate for a pass-through entity is reduced to 33.4%. That equals the highest federal income tax rate for individuals on passed-through income that is reduced to reflect the QBI deduction [37% x (100% – 20%)], plus 3.8% for the NIIT or 3.8% for the Medicare tax portion of the SE tax (whichever applies). However, the QBI deduction is allowed only for 2018 through 2025, unless Congress extends it.

READ MORE: The New Tax Law & Pass-Through Entities: The Pros and The Cons

Other Related Issues to Consider

Business owners can use a variety of strategies to help lower their tax bills, and those strategies may vary depending on the type of entity you choose. Before deciding on the optimal business structure for your start-up, here are some other issues to consider.

Deductions for capital expenditures: For the next few years, C corporations and pass-through entities will be able to deduct 100% of the cost of many types of fixed assets, thanks to the TCJA's generous Section 179 rules, which are permanent, and the 100% first-year bonus depreciation deduction, which is generally available for qualifying property placed in service between September 28, 2017, and December 31, 2022. Read more about the changes here.

These changes under the new tax law may significantly reduce the federal income tax hit on a capital-intensive business over the next few years. However, reducing pass-through income with these favorable first-year depreciation rules will also reduce allowable QBI deductions.

For 2018 through 2025, this strategy is a bit more attractive because the TCJA's rate reductions for individual taxpayers mean that most shareholder-employees will pay less tax on salaries and bonuses. In addition, any taxable income left in the corporation for tax years beginning in 2018 and beyond will be taxed at only 21%. Finally, C corporations can provide shareholder-employees with some tax-free fringe benefits that aren't available to pass-through entity owners.

Appreciating assets: If your business owns real estate, certain intangibles and other assets that are likely to appreciate, it's still generally inadvisable to hold them in a C corporation. Why? If the assets are eventually sold for substantial profits, it may be impossible to get the profits out of the corporation without double taxation.

In contrast, if appreciating assets are held by a pass-through entity, gains on sale will be taxed only once at the owner level. The maximum rate will generally be 23.8% or 28.8% for real estate gains attributable to depreciation.

However, a spin-off might allow you to take a partial QBI deduction. How? If you can spin off operations that don't involve the delivery of specified services into a separate pass-through entity, income from the spin-off may qualify for the QBI deduction.

The IRS hasn't yet issued guidance on this strategy. Plus, the QBI deduction is scheduled to expire after 2025, unless Congress extends it. So, making big changes to create QBI deductions may not be worth the trouble. Talk to your tax advisor before attempting a spin-off.

The TCJA has far-reaching effects on business taxpayers. Contact us to discuss how your business should be set up to lower its tax bill over the long run.

For simplicity, this article focuses on start-ups. If you own an existing business and wonder whether your current business structure still makes sense, many of the same principles apply. But the tax rules and expense for converting from one type of entity to another add another layer of complexity. We can help you with the ins and outs of making a change.