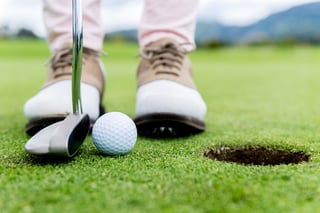 While the federal tax reform act included a lot of new tax benefits for businesses, there were some reductions, as well. A significant one for many businesses is the loss of business entertainment expense deductions.

The tax reform bill was passed on December 22, 2017, and many of our clients and friends have been asking if there are things that they can or should be doing now to get a head start on the tax compliance that needs to be done.  Although we are awaiting more guidance with bated breath regarding many of the provisions in the new law, the accounting for entertainment and meal expenses is one area where businesses should take immediate action.

One upside is any meals associated with entertainment activities are still 50% deductible. For example, if a business owner takes a group of clients golfing, the cost of the greens fees would not be deductible, but food and beverages purchased before, during or after the round of golf, will still be 50 percent deductible.

The tax reform act not only changes the entertainment expenses deduction mentioned above, the act also changes the rules regarding the deductions for meals provided for the convenience of your employees. In 2017 and prior years, meals provided to employees in your office or other work location were considered to be for the convenience of the employer and therefore were 100% deductible. An example is when dinner is provided to employees working after quitting time in order to complete a project or meet a customer deadline. Under the old rules, these meal expenses were deductible 100%, and the business would have recorded them in a separate account in their general ledger.

READ MORE: The New Tax Law & Pass-Through Entities: The Pros and The Cons

Because of these new tax rules, every business should set up separate accounts in their general ledger account to record entertainment costs, which are non-deductible. This account would include expenses for golf outings, sporting events, fishing trips, etc. Another account would be needed for meals that are 50% deductible. Remember to separate out meals that are part of any employee travel, client entertainment, or for the convenience of the employer. Another separate account will be needed for the “office holiday party” expenses for employees.

The tax reform act changed the deductibility of meals and entertainment expense, however the requirement to have written documentation to support that the expenses were incurred for business purposes is still required. This would include records showing the date and place the expense was incurred, the amount of the expense, the business purpose for the expense and the business relationship with the people who the meal was provided to.

Contact us on any questions you may have related to the new rules for meals and entertainment expenses or any of the other changes made by the tax reform bill.