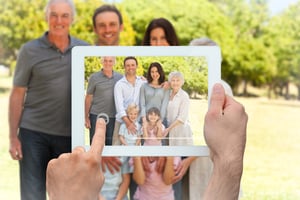 As a result, some carefully constructed estate plans will be damaged. Here's the story.

For example, Ann is 40 years old when she inherits her elderly Aunt Lilly's $500,000 Roth IRA. The current IRS life expectancy table estimates that Ann will live for another 43.6 years.

Before the SECURE Act, the RMD rules allowed nonspouse beneficiaries to keep an inherited account open for many years and reap the tax advantages for those years. With an IRA, this is sometimes called the "stretch IRA" strategy. It's particularly advantageous for inherited Roth IRAs, because the income those accounts produce can grow and be withdrawn free from federal income tax. So, under the pre-SECURE Act RMD rules, a stretch Roth IRA could provide protection from future federal income tax rate increases for many years.

The SECURE Act requires most nonspouse IRA and retirement plan beneficiaries to empty inherited accounts within 10 years after the account owner's death. This is an unfavorable change for beneficiaries who would like to keep inherited accounts (generally traditional and Roth IRAs) open for as long as possible to continue reaping the tax advantages.

Other nonspouse beneficiaries will get hit by the new 10-year account liquidation requirement. For example, continuing with the previous hypothetical situation, Ann could only keep the Roth IRA that she inherited from Aunt Lilly open for 10 years after her death, if Aunt Lilly dies in 2020 or later.

The unfavorable changes to the RMD rules under the SECURE Act are generally effective for RMDs taken from accounts whose owners die after 2019. The RMD rules for accounts inherited from owners who died before 2020 are unchanged.

READ MORE: The Employer Impact of the SECURE Act on 401(k)/Retirement Plans

Nonspouse beneficiaries should be aware of the changes to the rules for draining inherited accounts. If you inherit a traditional or Roth IRA with a substantial balance, contact us to determine if the unfavorable 10-year rule applies to you and to answer any other questions you have about minimizing taxes on distributions.

In addition, individuals who were relying on the Stretch IRA strategy as part of their estate plan will have to rethink things. We can help with that, too - learn about our Estate & Trust Services for more information.

RMD Rules in the Real World

Andy dies in 2020. He leaves his IRA to designated beneficiary Lucy, his sister, who was born eight years after Andy. Lucy is considered an eligible designated beneficiary, because she's no more than 10 years younger than the deceased account owner. Therefore, the balance in the inherited IRA can be paid out over Lucy's life expectancy. If Lucy's luck runs out and she dies before the account is exhausted, the remaining balance must be paid out within 10 years after her death.

Ernesto died on December 15, 2019. He left his IRA to designated beneficiary Francine, his niece, who is 30 years younger than Ernesto. Because Ernesto died before 2020, the balance in the inherited IRA can be paid out over Francine's life expectancy under the pre-SECURE Act RMD rules. If Francine dies on or after January 1, 2020, the balance in the inherited IRA must be paid out to Francine's designated beneficiary within 10 years after Francine's death.