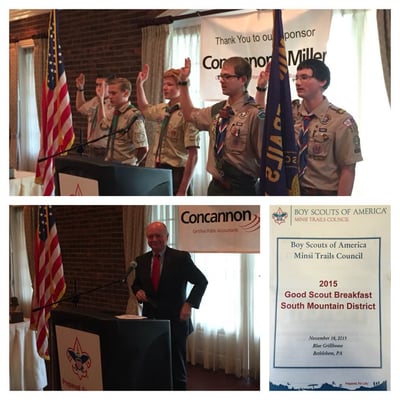 Minsi Trail Council members said Oster is passionately committed to the council, where he has been a board member since 1997.

“I can’t think of one time where I’ve asked for Bob’s support for the Boy Scouts and he’s said no. And it’s not just that he’s said yes – he’s been engaged,” Minsi Trails Council Scout Executive and CEO Craig Poland said. “There’s not someone who represents this community better than Bob.”

Good Scout Breakfast Chairman Jonathan St. George said he’s been honored to be friends with Oster for over 30 years.

“I’m in awe of your volunteering for the Boy Scouts all these years,” said St. George, senior vice president of The Provident Bank. “Where would be without community leaders like Bob.”

Oster, who plans to retire in September after 38 years at Concannon Miller, urged attendees to strongly consider every opportunity that’s presented to them.

“The more opportunities you take advantage of, the luckier you get – and I’m pretty lucky,” he said.

The event raised more than $26,000 for the Minsi Trail Council, which will be used to help disadvantaged youth take part in Boy Scouts, including providing for uniforms and camp scholarships.