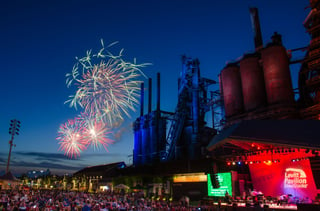 Congratulations to our dear client ArtsQuest on the fifth anniversary of SteelStacks, the South Bethlehem arts complex that has truly changed our community for the better.

Concannon Miller has been a proud supporter of SteelStacks since it opened, including being the first company to hold an event there,  its annual After Tax Season party on April 15, 2011.

Concannon Miller also contributed to the capital campaign for the ArtsQuest Center at SteelStacks and is serving as the presenting sponsor for RiverJazz at SteelStacks for the sixth year running.

“SteelStacks is a phenomenal community asset,” Concannon Miller CEO Bob Oster says. “The complex has made Bethlehem the festival king in the Northeast, if not the United States.”

“The ArtsQuest Center and our SteelStacks programming have an annual economic impact of more than $48 million,” ArtsQuest President and CEO Kassie Hilgert says in a press release.

Concannon Miller was moved to be part of the private sector that helped create SteelStacks because of its longstanding commitment to the community, Oster says. Giving back to the community is explicitly spelled out in Concannon Miller’s strategic plan, and the company has supported ArtsQuest since the inaugural Musikfest in 1984, making it one of the few Lehigh Valley companies to support the organization since its inception.

Oster also notes that the opening of the SteelStacks complex is surely a leading factor in Bethlehem’s regular inclusion on top places to live lists.

“SteelStacks has had a real positive impact on the region’s livability,” Oster says.