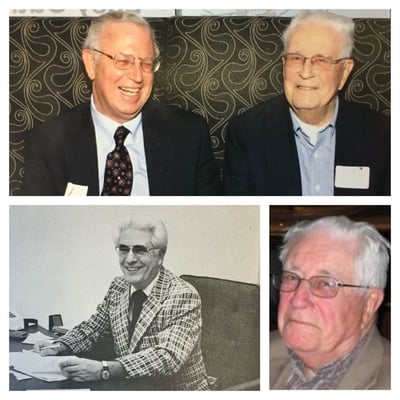 Concannon, of Allentown, started with the firm in 1960 and became a name partner in 1961.

“He leaves behind a legacy and a brand for the firm in the Lehigh Valley, and beyond. That brand is true professionalism and superior client service, while having fun at the same time,” Concannon Miller CEO Bob Oster said.

Shareholder Bob Vitale added: “We as a firm owe our success and good fortune in large part to Frank Concannon. Everyone who ever knew Frank will only have fond memories of him and the legacy he leaves behind.”

“His philosophy for the firm was ‘Let’s hire the best people and train them well,’” Miller said.

Shareholder Barry Hetzel also credited Concannon with helping the firm grow and succeed and for being a leader in community service.

“He was certainly a role model for being successful and also giving back,” Hetzel said.

“Frank loved to tell jokes.  He was a good man, and will be missed,” said Kathy Markle, who started at Concannon Miller in 1967.

She said this was one of Concannon’s famous jokes:

There was a bookkeeper who, when starting each day, would open one of his desk drawers, take out a piece of paper to read, and then put it back. This went on for a long time, and finally, a co-worker had to ask him what he was reading. The bookkeeper showed him the paper. It read “debits on the left, credits on the right.”

In addition to his trademark jokes, Concannon Miller Marketing Associate Tina Christman said she remembers Concannon most for being extremely welcoming.

“Frank was a very kind and caring person and it was an honor to work with him at Concannon,” she said. “He made you feel like one of his family and not just an employee of the firm.”

Concannon retired from accounting in 1981 to start a second career in politics. He served more than 16 years as an elected official in the Lehigh Valley, including as Lehigh County controller, a member of Allentown City Council and two terms as Allentown city controller.

“Frank’s real love was politics, so he retired from the firm at a fairly early age to get into politics,” Miller said.

All of us at Concannon Miller thank Frank for setting high standards and helping to grow the firm into the industry-leading company it is today. And for all the jokes over the years.

Concannon’s obituary and information on services can be found here.