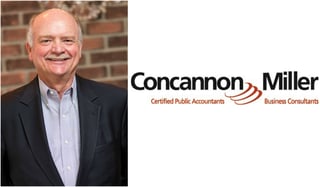 Concannon Miller is proud to announce it’s been nominated for Lehigh Valley Business of the Year and that its retired CEO has been inducted into the LVB Hall of Fame.

Bob Oster, who led the firm for 18 years until his retirement last year, is part of the 2017 Lehigh Valley Business Hall of Fame class, along with C.F. Martin IV from C.F. Martin & Co. and Craig E. Poole from DoubleTree by Hilton.

The firm as a whole is nominated in the Business of the Year, 24-100 employees category.

“We’re humbled by the many honors we’ve received this year, including the LVB Business of the Year nomination,” Concannon Miller President & COO Ted Witman says. “Also, a hearty congratulations to Bob Oster, who did so much for our firm and for the local community.”

Earlier this year, Concannon Miller was named the region’s Best Accountant in the Lehigh Valley Business Reader Rankings’ contest. Also in 2017, the firm won an Excellence in Business Award from the Greater Lehigh Valley Chamber of Commerce and a Societas Award for Responsible Corporate Conduct from the Forum for Ethics in the Workplace.

The Business of the Year winners will be named at a Dec. 5 event. Tickets can be purchased here.