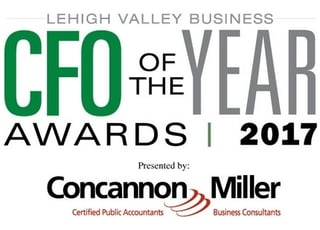 Concannon Miller is honored to once again be the presenting sponsor for Lehigh Valley Business’s CFO of the Year Awards.

The sixth annual event will be held Sept. 19 at DeSales University. The CFO of the Year awards honor the Greater Lehigh Valley’s financial executives for the critical role they play in making their companies successful.

“The role of the CFO is ever more critical in a company’s success, with many taking part in strategic planning in addition to overseeing company finances,” Concannon Miller President & COO Ted Witman says. “It’s a vitally important role that deserves to be celebrated.”

Nominations are currently being accepted through June 2 for the nine CFO of the Year award categories. New this year is an award recognizing the CFO of the Year for the region’s public companies.

Information on the award categories and eligibility is below. Nominations can be submitted at: http://www.lvb.com/section/CFO-Awards-Nomination.

An independent panel of industry professionals will judge the nominations and select the finalists in each of the award categories. Finalists will be recognized and the winners in each category will be announced during an awards breakfast on Sept. 19, 2017.