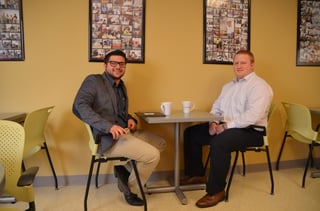 On Mike Dranchak’s first day as a staff accountant at Concannon Miller, he already had friends.

That’s because his company-assigned Onboarding Buddy had already reached out to him. Mike’s Onboarding Buddy, staff accountant Troy Silfies, emailed Mike apartment leads and invited him out to lunch with a few other accountants, as well.

“I was able to get a feel for the area and the company before moving down here,” says Mike, a Scranton-area native. “It’s great to have someone show you the ropes so you’re not just thrown into the fire.”

Buddies help new employees get connected with a simple first step of a tour of the office on the first day. Concannon Miller also picks up the tab for several Buddy lunches to make sure new people know the best places to eat.

“Our hope is that each person who joins Concannon Miller has a great start, and buddies are just one way we do it.” Connie says.

The Onboarding Buddy also serves as new employees’ go-to person for any questions that pop up, such as how to submit time and expenses or even things like how to send a fax or where to find more napkins.

“The Buddy lunches are nice because you can ask questions you may feel like you can’t otherwise, even if you think it’s a dumb question,” Troy says.

Staff Accountant Kara Spangenberg was assigned Staff Accountant Emily Smith as her buddy when she started in September 2014. Kara says she was very glad to have a peer she could talk to and ask questions.

“It’s a bit different talking to another staff versus a manager about some things when you’re starting out,” Kara says. “It was nice to have someone to talk to who was more experienced.”

Though Emily had worked as an intern before starting full time in June 2014, she says she still found the Onboarding Buddy Program incredibly worthwhile.

“It provides a person to lean on,” she says. “It’s kind of a sense of security that you’re not going to look like you don’t know what you’re doing.”

“We try to select a buddy who is someone we think you’d become friends with,” she says. “Having friendly relationships at work can make for a richer work experience, so this accelerates that.”

Concannon Miller also connects its interns with a personal Navigator to serve in a similar go-to person role.