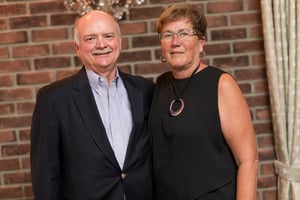 Longtime Concannon Miller CEO Robert Oster and his wife, Cindy, are being honored with the prestigious Philanthropy in the Arts Linny Award by the ArtsQuest Foundation. The Bethlehem-based couple will receive the award during the 2019 Linny Awards Celebration Nov. 14, 6 p.m., at the ArtsQuest Center at SteelStacks.

Starting with Concannon Miller in 1979, Oster became CEO in 1998 and is credited with helping the firm double in size during his time as its leader. During his tenure with the company, he made community involvement an organization-wide priority. Oster retired from the company Sept. 30, 2016.

Over the years, Concannon Miller has supported numerous community and nonprofit organizations in the region. The company was instrumental in the establishment of Musikfest, supporting the festival since the inaugural event in 1984. It has continuously expanded its involvement with ArtsQuest, going on to support the RiverJazz series at SteelStacks, jazz programs, arts education programs and more. In 2016, the accounting firm was recognized by the ArtsQuest Foundation when it was honored with one of the inaugural Business Supporter of the Arts Awards.

A nursery school teacher at First Presbyterian Church in Bethlehem for almost two decades, Cindy was a longtime Musikfest volunteer, an active member of the Junior League of the Lehigh Valley and has assisted with a number of community projects over the years.

“Cindy and I are grateful to the ArtsQuest Foundation and are honored to receive this award,” says Bob Oster. “ArtsQuest’s programs and services, including Musikfest from its inception in 1984, have been an integral part of our entire family’s community life, which now includes our two grandsons who enjoy coming to the festival each year. It is undeniable that the positive economic and cultural impact of the organization on the City of Bethlehem and the entire Lehigh Valley community is significant.”

The Philanthropy in the Arts Award is presented to an individual, family or foundation that has made a major commitment to supporting arts and cultural organizations or programs in the region. Winners demonstrate a substantial and sustained commitment to arts and culture, thereby playing a leadership role in enhancing access to the arts and the improving the quality of life in our region.

Tickets for the 2019 Linny Awards are on sale now at www.artsquestfoundation.org.

About the Linny Awards

Named after the late Marlene ‘Linny’ Fowler, a stained glass artist and community leader who supported artists and arts organizations throughout the Lehigh Valley for more than a quarter century, the Linny Awards are designed to recognize and celebrate the region’s flourishing arts community. In addition to the Pinnacle of the Arts, Business Supporter of the Arts and the Lifetime volunteerism award, the Foundation will present several other awards Nov. 14 including Visual Artist of the Year, Performing Artist of the Year, Emerging Artist of the Year, Arts Educator of the Year and Student Artist Scholarship Award.

Proceeds from the Linny Awards go to support the Foundation, which Fowler helped found in 2003. The Foundation is focused on supporting and strengthening the long-term sustainability of ArtsQuest, the nonprofit that presents Musikfest and 4,000 other programs, events and educational classes annually for the region, 40 percent of which are free to attend.
For additional information on the ArtsQuest Foundation and the Linny Awards, please visit www.artsquestfoundation.org.