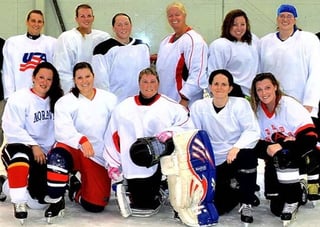 Some people give back by collecting canned food or attending fundraisers.

Concannon Miller employee Kara Spangenberg does it by playing hockey.

Kara recently participated in her third Hockey Fights MS tournament, which has raised more than $130,000 for multiple sclerosis research in its 10-year history. The tournament Kara recently took part in at the Steel Ice Center in Bethlehem specifically benefitted the MS Wellness Program at Good Shepherd Rehabilitation Network in Allentown.

Community service is a company cornerstone, and we also strongly encourage our employees to pursue their passions for a great work-life balance. As we often say, we’re more than accountants – among us are foodies, yogis, birders, photographers and so much more.

Kara, who joined Concannon, Miller & Co. in September 2014 as a staff accountant, has been playing hockey since her youth. Growing up in Allentown, she played on the Bethlehem Blast youth hockey team, also at Steel Ice Center. She played for a club team for one year when she attended Elmira College, where she was an Honor Scholar.

“Growing up, I was a big rollerblader, so skating in general is just fun to me,” said Kara, who now lives in Bethlehem. “I like the competitiveness of it, and all the skill with keeping your balance and hand-eye coordination – there’s just more aspects than other sports.”

Kara’s tournament team – which was called All In – consisted of some of her former Bethlehem Blast teammates and other friends. The team plans to compete in the annual tournament in 2016, as well.