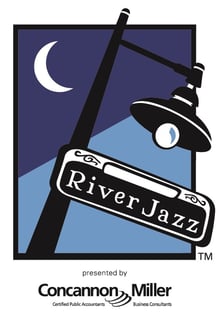 Concannon Miller is proud to again be the presenting sponsor for ArtsQuest’s great RiverJazz festival.

“RiverJazz brings internationally-acclaimed jazz, blues and even rock artists to our region each spring, providing a unique experience for jazz aficionados and music lovers in general,” Concannon Miller CEO Bob Oster says. “This series also showcases talented local jazz artists, including some of our amazing high school bands that compete in the SteelStacks Jazz Band Showcase, alongside these world-renowned artists.”

“Concannon Miller is again thrilled to be part of this series, and we’re excited by how much it’s grown over the past six years,” Oster says.

Tickets for the shows, which take place at the ArtsQuest Center’s Musikfest Cafe, 101 Founders Way, Bethlehem, go on sale 10 a.m. Tuesday to ArtsQuest members and 10 a.m. Friday to the public at www.steelstacks.org and 610-332-3378.

On April 22, jazz guitarist and composer Pat Metheny takes the stage with Grammy-winning bassist Ron Carter. Metheny, who reinvented the sound of jazz guitar in 1975 with his first album, Bright Size Life, continues to redefine the genre by using new technologies and pushing the boundaries of his instrument.

The 2008 Radio & Records “Debut Artist of the Year,” Jessy J will perform May 12 at RiverJazz. After playing her first major solo performance at the Catalina JazzTrax Festival in 2006, the saxophonist and singer took to the studio, releasing the 2008 Billboard jazz chart-topper Tequila Moon, followed by 2011’s Hot Sauce, which debuted at No. 1 on the Billboard jazz chart.

Headlining RiverJazz on May 18 is multi Grammy-winning singer-songwriter and multi-instrumentalist Delbert McClinton. Best known for his 1980 hit “Giving It Up for Your Love” and 1992 duet with Tanya Tucker, “Tell Me About It,” McClinton is legendary for his ability to seamlessly combine country, blues, soul and rock ’n roll. His most recent studio release is 2013’s Blind, Crippled and Crazy.

Also headlining RiverJazz is the Craig Thatcher Band, a Musikfest favorite and multi-Lehigh Valley Music Award winner. On April 30, Thatcher and his band will be presenting the music of iconic guitarist Jimi Hendrix, featuring songs like “Foxy Lady,” “Bold as Love” and “Purple Haze.”

Additional RiverJazz concerts will be announced in the coming weeks. Ticket prices and information for the announced shows are below: