Posted by Lisa Haffer and David DesRoches on Thu, Apr 4, 2019 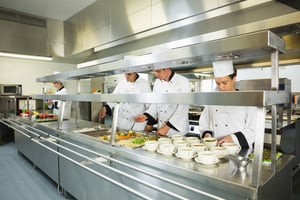 Restaurant owners who invested in interior improvements in 2018 may be surprised when they receive their 2018 tax returns and see higher than expected tax liabilities. This is a result of an inadvertent drafting error in the Tax Cuts and Jobs Act (TCJA) relating to the depreciation of restaurant improvements.

Before the TCJA, the tax law provided rules for multiple categories of restaurant property assets, many of which were eligible for favorable tax depreciation benefits. To simplify the rules, tax reform consolidated the categories applicable to interior improvements into the single category of Qualified Improvement Property (QIP).

If drafted correctly, QIP would be eligible for 100-percent bonus depreciation and a 15-year cost-recovery period. In what is believed to be an inadvertent drafting error that has received much press, interior improvements placed in service in 2018 must be depreciated over a 39-year life without bonus depreciation.

Because of this drafting error, while you may be enjoying the rewards of your recent renovation with an expanded and reinvigorated customer base, you may also be sweating your tax bill. In good news, there are workarounds that can help mitigate the impact of the QIP error in the absence of a retroactive technical correction to fix the error. Read on for two of the more popular strategies: the retail refresh safe harbor for remodels and cost segregation studies.

Under IRS Revenue Procedure 2015-56, known as the Remodel-Refresh Safe Harbor, 75 percent of the costs of an improvement can be immediately expensed, with the remaining 25 percent depreciated over 39 years. Because this is a safe harbor, restaurants do not need to spend time analyzing invoices to determine whether a cost is a repair (eligible for immediate tax expense) or a capitalized asset (depreciated over 39 years for tax); 75 percent of costs are eligible for immediate deduction.

There are pros and cons to adopting the remodel safe harbor. A distinct advantage that the safe harbor offers over bonus depreciation is that the immediate 75-percent deduction reduces both federal and state taxable income. QIP, by contrast, would have allowed for a 100-percent bonus deduction, but only on federal tax returns. Most states would require the bonus depreciation to be added back and the improvements to be depreciated without bonus over 39 years.

A disadvantage of using the safe harbor is that a restaurant cannot take partial disposition losses for items that are replaced, and instead must maintain assets in General Asset Accounts until a final disposition.

In addition, restaurants that incur debt to pay for their remodels may not reap the full benefits of the safe harbor. This is because of the new interest expense limitation rules implemented under tax reform, which limit the amount of interest that can be deducted in a given tax year to 30 percent of adjusted taxable income (ATI).

For tax years prior to 2022, taxpayers can increase their ATI (and thus the amount of deductible interest) by adding back depreciation. In contrast, the 75 percent safe harbor remodel expense does not constitute depreciation for this purpose. Restaurants that used loans to pay for remodels will want to run projections to ensure that the benefits of the remodel expense are not diminished by disallowed interest expense deductions.

The ability to use the remodel safe harbor is contingent upon having audited financial statements. Restaurants with audited financials have until the extended due date of their 2018 return to adopt the safe harbor method for this tax year. Businesses that previously evaluated whether to adopt the safe harbor and determined that the cost of having an audit did not outweigh the potential benefits may want to take a second look considering the absence of favorable QIP benefits.

Decorative millwork and light fixtures, restaurant-specific electrical and plumbing work and signage are a few examples of items that, if identified in cost segregation studies, may be eligible for 100-percent bonus depreciation and a five- or 15- year life. Without a study, these same assets would be depreciated over a 39-year life with no bonus.

Cost segregation studies performed in the 2018 tax year on prior year projects can result in significant “catch-up” depreciation deductions that can be claimed on 2018 tax returns. Current deductions of “catch-up” depreciation is a tax planning tool that restaurants can use to defer having studies performed on certain projects until years that they have high taxable income.
Unlike the remodel safe harbor workaround, depreciation deductions generated via a cost segregation study are permitted to be added back when computing ATI for purposes of the new interest expense limits.

A disadvantage to cost segregation studies is that most states will require accelerated depreciation to be added back and replaced with a slower state depreciation regime. As a result, cost segregation studies performed for either 2018 projects (that generate 100-percent bonus) or prior year projects (that generate 50-percent bonus) will not generate the same immediate benefits for state tax as they do for federal tax.

BDO’s Take:
Many businesses are extending their 2018 tax returns as they investigate solutions to the QIP error. If you haven’t yet decided whether to extend, these two potential solutions may be a good reason to consider doing so. Most pass-through entities must file by March 15, but a six-month extension would give them until September 16 (as the 15th falls on a Sunday) to file; corporate taxes are due April 15, but an extension would give them until October 15 to file. Another reason to extend is the possibility that QIP will be fixed and made retroactively effective for the 2018 tax year.