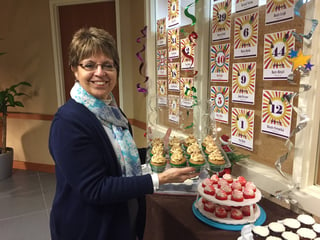 Cakes are commonplace at many office celebrations.

But at Concannon Miller, celebrations aren’t marked by just any cakes. Just about every Concannon celebration is marked with a cake or cupcakes made by Staff Associate Judy Remaly.

Judy’s cupcakes are exquisitely decorated – including touches such as marshmallow snowmen and M&M flowers – and come in gourmet flavors, including bananas foster, mojito and creamsicle.

Judy’s cupcakes are the focus feature of every Concannon Miller employee anniversary celebration in Bethlehem, dubbed Concanniversaries. They take place quarterly and honor every employee celebrating a work anniversary in those three months.

“Many companies have anniversary celebrations, but our Concanniversaries are special and Judy’s cupcakes give them an extra personal touch,” Concannon Miller President & COO Ted Witman says. “Everybody looks forward to see what she creates each time – it’s a lot of fun.”

Concanniversaries are highly anticipated because of Judy’s cupcakes.

“Judy’s cupcakes never disappoint – it’s like biting into pure joy,” says Staff Associate Kristol Nelson, whose favorite flavors are chocolate peanut butter and dulce de leche. “We are blessed to have access to some of the best cupcakes in the Lehigh Valley.”

Judy has baked since her kids were little but she decided to turn her hobby into a business when she lost a previous job in 2007. She got hired for Concannon Miller’s Back Office Solutions department shortly after but has kept Gran’s Cake Creations as a side business ever since.

Her baking reputation grew around the office as colleagues hired her to make cakes for their family celebrations and in 2011, the company hired her for the Concanniversaries. She’s also made cakes and cupcakes for many other office events, including baby showers, milestone birthdays and retirements, including the retirement of longtime CEO Bob Oster in September.

Judy says she loves baking for her co-workers.

Judy has made more than 100 different flavors for the office, which she says provides a great flavor testing ground for her. Her personal favorites are bananas foster, chocolate chip cookie dough and s’mores.

“It makes the anniversary celebrations more personal that an actual colleague makes the cupcakes. Plus, they’re all delicious,” he says.